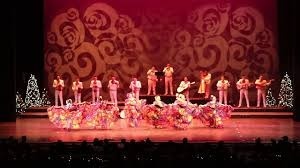 *Concert date is subject to change.

2017 was a year full of surprises. BFLA collaborated with Mitu Network on a Mariachi Remake of Beauty and the Beast's "A Tale as Old as Time," featuring Mariachi Garibaldi de Jaime Cuellar and BFLA's Director, Kareli Montoya.  The video went viral on Facebook at 15 million views (and counting)!

They recently had the opportunity to work with Disney Studios on a magical performance in celebration of Pixar's new movie, "Coco," at the D23 Expo where they performed on stage with Benjamin Bratt, Grammy Award-Winning Mariachi Divas and the Grammy®-winning Gordon Goodwin Big Phat Band.  They also performed at the Coco Premiere at El Capitan Theatre and on Dancing With the Stars, "Disney Night."  BFLA started 2018 with a BANG, performing Coco's Academy Award-winning song, "Remember Me," on the 90th Annual Academy Awards alongside Natalia Lafourcade, Gael Garcia Bernal and Miguel.

Mariachi Garibaldi de Jaime Cuéllar has captivated and delighted audiences at both intimate venues and major theaters throughout the United States, including the John Anson Ford Amphitheatre, Bakersfield Fox Theatre, and the Auditorium Theater in Chicago. Founded in 1994 by Jaime Cuéllar, the ensemble of 8-12 mariachi musicians is now led by his son, Jimmy K. Cuéllar, a three-time Grammy award winner.

Frequently collaborating with other artists such as Pedro Fernandez, Ana Barbara and Angela Aguilar, Mariachi Garibaldi de Jaime Cuéllar was selected for a 2017 production by the “mitú” network in which they teamed with Ballet Folklórico de Los Ángeles to recreate “Tale as Old as Time” from Disney’s Beauty and the Beast. The video of the performance received over 15 million views. Most recently, Mariachi Garibaldi de Jaime Cuéllar were featured artists in Center Stage Opera’s 2019 production of Mozart’s Le Nozze de Figaro. Avid proponents of music education, the group teaches mariachi for all ages at their own Academy for Performing Arts

Venue: The Soraya in Northridge, CA